When Family Promise began, it was a local response to a problem in Union County, New Jersey. Thirty years later, we are a national movement involving more than 200,000 volunteers and serving more than 110,000 people yearly.

Family Promise of Southern Ocean County opened its doors on January 25, 2009,  to address the crucial need for emergency housing in Ocean County, NJ. Since then, the number of host congregations has increased to 21 and over 200 volunteers were recruited to aid with everything from meals to childcare to financial guidance.

In April 2019, FPSOC moved into a larger day center.  FPSOC’s Day Center serves as a home base during the day for families in the network. It provides an address and phone number for potential employers, access to computers for job and housing searches, and shower and laundry facilities. Families also work with staff on individualized needs based programming to work towards achieving self-sufficiency.

Family Promise of Southern Ocean County had not sent out previous newsletters, so we were able to go in with a little more flexibility and creativity. We then analyzed their contact list to best determine with which segments of their audience we would be communicating.

The primary objective of Family Promise of Southern Ocean County’s email newsletter was focused on share information to their audience, as well as encouraging email contacts to our website for make donations or volunteer forms.

The first email newsletter to the right was sent through MailChimp in early October and features a 37.4% open rate and 6.3% click rate, which were both well above industry average.

The newsletter was focused on sharing recent blog posts, the primary method for disseminating information. The weekly blog posts were another element of our digital communications strategy for Family Promise of Southern Ocean County. The blogs contained information about new programs, industry information, detailing new events, and more. 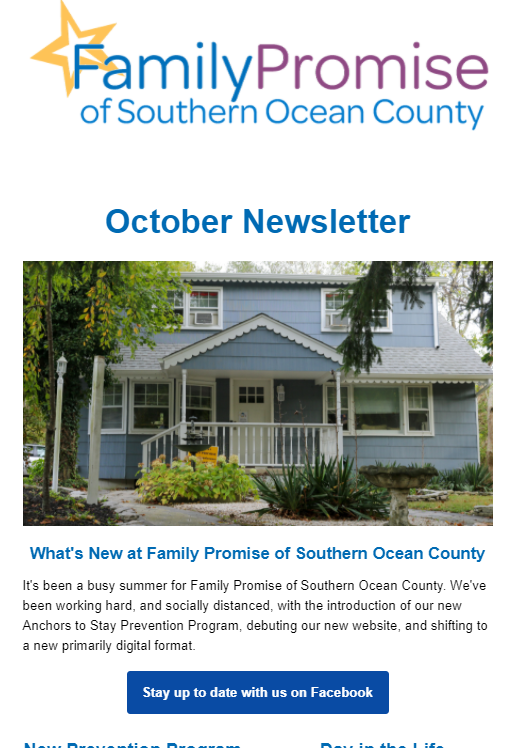 In November, Family Promise of Southern Ocean County switched email service providers, now using Constant Contact. Also this month, I worked with a FPSOC board member to establish an email collection plan in conjunction with an online event. This collection resulted in growing the email list by more than 25%.

Starting in January 2021, each month had a rough overarching theme that the blog posts revolved around, and around which the email newsletters written and designed. The January newsletter is pictured on the left, and can be seen in full here.

Click below to read blogs written for Family Promise of Southern Ocean County. Articles were also published in the local Causeway Gazette.

What is Housing Insecurity?

Over the course of four months, email open rates rose to 41.6% and click rates rose to 14.6%, representing a respective 4.2% and 8.3% growth from when we started. Based on my recommendations over the course of those months, their email subscriber list grew more than 28%. This included organic growth from website opt ins, online event email collection, and social media pushes regarding the newsletter.

Ready to Jump in?

If you’re ready to get your project started, contact us to jump in!